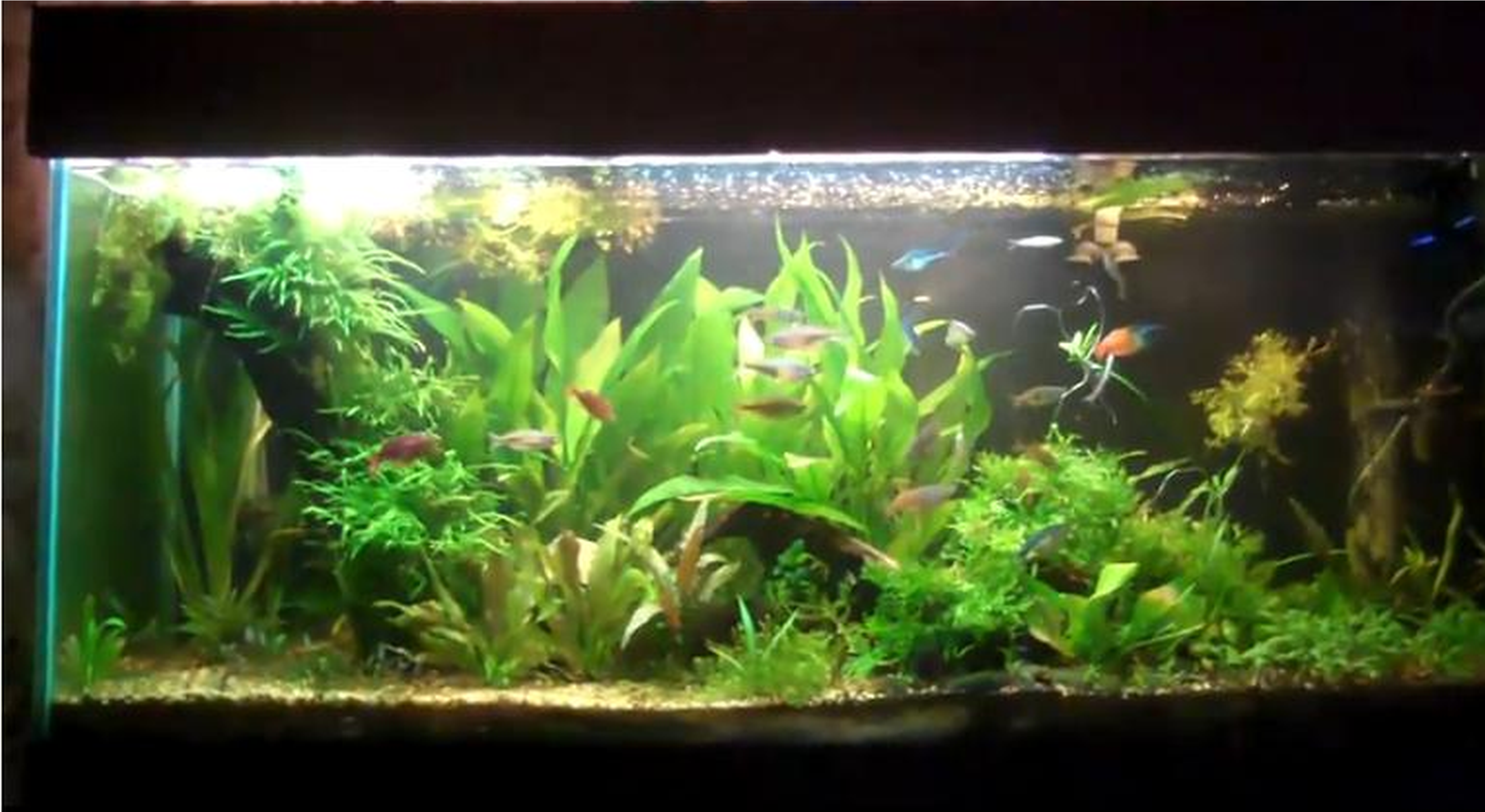 The 220 is by far my best work to date in the aquarium hobby. Some of my other tanks have been great, but this is my best work yet.

I recently added the rare Melatonia Fredricki (sp?) to the tank. (fish at 133) This helped me get back into the groove with it. I also added some of the fattest jungle val I have ever seen in the back. As you all know, I love jungle val, when I got this species at the AGA for 4$ I was thrilled.

I don’t want this to sound like a bragging post, but I have received many compliments on this tank and feel it is worth sharing what has made it work so far, and how it got there. I will also touch on what is lacking and could be improved.

What sets this 220 planted tank apart is the use of the thirds rule. You can kinda break it down into sections from left to right.  I have been told that I make most of my tanks left to right. Not sure why this is, but its how I roll.

You’ll notice the tanks line of plants cuts diagonally from the top left, down to the bottom right. This is intentional. I am trying to “use” the open space to give the sheer size of the tank an opportunity to show. Basically, I am leaving part of it lightly planted for a reason.  The rainbows love this open space too.

One of my favorite parts of the tank is the drift wood that runs about 2/3 of the tank. The piece still needs a rock on it to hold it down. (lord knows its been in the tank a damn year, plus out in my pond the year before that!)  I wish it would sink so I can take that rock off that you see right at the middle third of the tank. That driftwood is meant to flow through the tank.

The plants growing up the left side of the drift wood is called Trident Java fern. I paid $25 for a small piece of it at the AGA in 2008. It is still worth that much as it was going in the plant auction for 19.  Worth every penny. It is a good hardy grower like most ferns.  I also like the way if flares out.

Amazon swords occupy the back, middle half of the tank. I never trim them. Occasionally I’ll pull out a leaf that looks bad, but for the most part I leave them alone. I have some of the little baby Amazon Swords for sale that grow up off of this plant.

The baby tears almost right in the middle gets over grown on occasion. This past summer I cut it way back and planted it out back. It was either that plant or the star grass that had baby rainbow eggs on it.

Originally this tank had three different types of gravel in it. Mixed brown on the left half, black on the right and a patch of white sand in the front. I have kinda let them mix a little. It doesn’t bother me.

What I’ve enjoyed about this tank is how well I did the dirt in it. I have the perfect recipe in there and it is working well. I also have just the right amount of rainbows rolling to where it looks cool, but isn’t hard to clean.

The 4 siamensis do a decent job cleaning up the bottom. I have already purchase 6 clown loaches because of the constant and needed pestering from Sean on here. (Thanks bro) The dude at the shop knows about this site and wouldn’t sell them to me because they had some ich spots after a few days. They looked good to me, but I’ll take his word. God knows he doesn’t want me bashing his shop. ( I wouldn’t unless something crazy happened)

If I could do it over again I might have used some crazier swords in the back instead of the regular amazons. ( Indian Red Swords)  I might have done more with the jungle val on the left.

The crypts on the right are there as I hadn’t yet ever owned crypt parva, or I would have probably used crypt parva.   Never too late.

I have thought about only using one species school of rainbows in it. But I like the different colors. “a rainbow of rainbows” was kinda my first thought.

Playing in this tank has been a nice return to the actual hobby for me. It’s relaxing. I love this site, but doing what got me to here has felt great. I am also excited that this tank is about 1 year old. I remember setting it up like it was yesterday. It was one of my first flip videos, and was pretty much the starting point for me making videos of my tanks.

So if you’ve gotten this far, Thank you and thank you 220 for being the start of the snowball that is my Fishtanktv and YouTube Channel.

What do you guys think about it? Ask me some design/ plant questions. I can do filter and DIY questions another day.

Species Sundays will be back next week. I ‘ve been working on a better/easier layout for all my plant species videos.