We pick out some great looking stems and send them!

Any variety we choose. We Pick!! May get between 3 and 10 species!

If you want big and completely random plants. THIS IS IT

I didn't count, but we received at least 30 stems (many of them already had roots sprouting at nodes and could be trimmed to start another plant). Good variety of leaf shapes and colors. My 15-gallon bookshelf tank had been looking a bit bare & sad, with just a couple crypts and an Amazon sword that was a baby of one of my previous orders from Dustin's. (The black male betta had been transferred to a breeder setup in the basement w/ a girlfriend, so the only fish in it were 2 glow light tetras, 1 or 2 Von Rio tetras and a trio of Corys (Julii or False Julli, not sure) and the substrate in this dirted tank is black. You really couldn't see diddly-squat in this tank (in my living room) with a Fairy Forest/Gnome theme. I added about 2/3 of this group of plants and now it pops nicely, and you can actually see the fish moving around in it. Once again, a wonderful order from Dustin's Fish Tanks! Will order again when the kids set up the 29-gallon at Hubby's office (for now still trying to find a stand he likes.)

Nice start to see what works in my water

This pack allowed me to create several bundles for the rescape of my tank! Couldn't be happier with the results!

I just received my new plants this evening and put them in my existing tank to keep them happy. They looked good, they looked healthy and had good color.
Last night I picked up some Aquasoil and substrate. I just picked up my "new/used" aquarium today and got it cleaned up. Hopefully I'll be setting up and planting the aquarium this weekend. 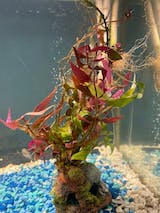 Purchase 2-75 gallon plant grow out tanks on Black Friday with 2-FX6 filters. Hit Dustin up on his Black Friday with 4 stems pack orders. Everything came in looking great and has all been planted. Now we wait!