Yet another Hygro from your fishtank friends at Dustin's Fishtanks.

NOTE: This plants are FIRE right now. They have been grown under water and already have roots started. You might see a tiny bit of melted under growth near the base... that is above water grown leaves melting back....

Suggested to us by our friend, Erick Sullivan up in New Hampshire, shoutout! We have also been known for our Hygrophilas. From the mega hardy "Alpha" Water Wisteria (Hygro Difformis, Up the to "Gangster Hygro Cordata Red" and down to the short and stunning Hygro Compact.

Well here comes another one.  Hygrophila Pinnatifida.  Yep and this one is another WOW Hygro.

What we have grown to love about Hygros is there ability to show you "love" with more orange and reds with the more light and fertilizers you give them.

Hygro Pinnatifida is no exception to this.  Under lower light conditions it will stay more green, but under higher light it will give you RED.

This plant is not as easy to keep as other species of hygro. (Generally speaking the thinner and narrower varieties aren't as rugged as the thicker fatter ones.)

This plants is more of a Midground plant and will make a nice contrast to a grassy foreground section.

We are growing this plant in high light to convert it quickly. The tips of the stems haven't rooted yet, but they are close.... This is a sweet plant.

You'll get three stems in a bundle.  DISCOUNTED BECAUSE THEY AREN'T FULLY CONVERTED YET.... but will be soon.

Great looking plant that I have never grown before. Can’t wait to see it in its glory! Thanks Big D! 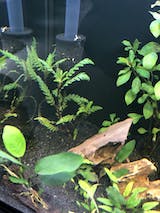 I received 4 stems and all of them had root growth to a varying decree. They seem healthy so I'm hoping they will thrive in my low tech aquarium. I bought these on a whim and they are the only hygro species in my tank so we will see. 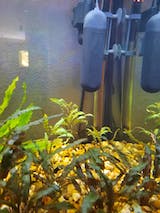 I bought four Hygrophila Pinnatifida from Dustin. Super healthy plants. Most other retailers haven't had them in stock for months. I've bought from several other online aquatic plant sellers, and Dustin's plants have always been the healthiest. Thanks again!

They came in great shape beautiful plants no damage to them. Was bigger plants then expected and more of them. Will be buying from u again

E
E.S.
Thanks for the shoutout!

Hey Dustin, just saw this, thanks for the shoutout!
Matt T. from last June nailed it... This plant can and will grow planted in the soil, but to anyone having any issues, tie it off to driftwood or a rock. Was trying to pull some out of my river style tank this morning and it had rooted so hard onto a large river rock that it pulled the large-ish river rock right out of my hardscape with it (no tie-downs). Another idea is to get some thinner branches and turn it into a palm/ jungle style bonsai with this as the canopy. Colors are definitely more muted on this species than some of the hygro's (thanks again for the variegated wisteria Dustin, looks sweet in my high light tank), but it will go dark green -> brown -> peach -> red with increasing light intensity.
Dustin, I have not forgotten that I intend to send you some more unique stuff, my tank is finally rocking again and I am now looking to start a small grow out with lights and totes so that I can get enough numbers on my rare stuff to give you the hookup. From there, spread it to the masses.