These are killer right now, but slightly less red as we simply don't have the sun as bright right now.

This is a intermediate ludwigia to keep much like the "Ovalis". It is light demanding and nutrient loving but is a fairly easy to keep. Sometimes also referred as brewipes

It doesn't require HIGH light or HIGH Fertilizer but moderate accommodations of both will give you what you want out of this plants!

Ludwigia Brevipes is a Foreground to Midground plant. It pairs extremely well with Baby Tears!

On a side note, from a detail perspective. I can honestly say this is one of the most beautiful and breath taking plants I have converted to Submerged Growth.

This plant does not require Co2 Supplementation. This is a fast growing and aquascaping MARVEL of a plant.

With it's narrow and pointed leaves these plants give off a really cool look that you don't get out of many ludwigias. Get yours while you can $9.95.

I just started fishkeeping again after a near forty-year absence, and this is my first ever attempt at a planted tank, so I am not exactly Professor Plant Guy. That being said, I received my first, but probably not last, order from Dustin's Fish Tanks two days ago. I live in SE New Mexico and I believe that Dustin's is somewhere in Florida. The package arrived here in the evening four days after it had been sent. While removing the plants from their packing, I probably cursed the packer person more than once, until I got everything unpacked, at which time I heaped praise upon the same person that I had cursed moments earlier. These plants were in beautiful shape, to my untrained eye and after about 36 hours in the tank they appear to even more robust and healthy, and none the worse for their four days in a dark carton. 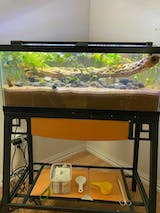 A week after purchasing, zero leaf loss, and new, submerged growth is looking fire!! unfortunately, they didn't come with any submerged growth, but in just a week with minimal ferts lots of new growth

Bought two bunches of these and they are completely not converted to submerged would have been nice to know that before I ordered them seeing how the description says they are “fire” right now. 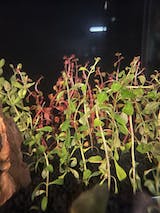 Figured I would do an update since this plant took off and it has become a refuge for my aquarium inhabitants. Corydoras hide out in the stems/roots and fish forage for microorganisms in it throughout the day. When I clear my floating plants and let some algae grow on it the ottos love it as well. The leaves are a perfect size for them to graze on.